Africa is a land of style!

Formal dressing aside, African men have a unique style of wear that distinguishes them from the rest of the world.

Being the second largest continent, Africa is diverse when it comes to fashion trends, most of which are influenced by traditional cultures, colonial tradition, and showbiz. As such, the easiest way is to cluster Africa into regions and observe trends within them – South, North, East, West, etc.

Let’s explore some of the authentic Afrocentric fashion trends for African men that keep recurring – in refreshing designs.

Southern Africa doesn’t offer too-too much when it comes to authentic Afrocentric fashion trends. Nonetheless, there are certain common trends in Southern Africa such as Madiba Shirt and Skhothane fashion. This is one of the famous African shirts that hit fashion trends in the early 1990s due to them being frequently adorned by Nelson Mandela, South Africa’s liberation hero.

Madiba shirt is a loose-fitting casual shirt that hangs over the trouser. It can be comprised of cotton or silk with batik and vivid colors. The shirt is currently experiencing a new resurgence, although it is not necessarily being worn by prominent personalities. 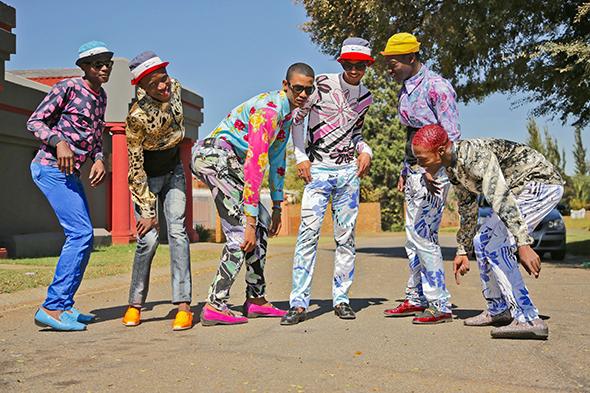 Skhothane is not just a clothing style but a ‘street’ subculture of Soweto.

Skhothane fashion comprises of brightly shining (often flowery) clothing that manifests some form of opulence among the poor suburban.

This fashion was dominant in Sowetan parts of South Africa in the mid-1990s.

Towards the end of the millennium, the fashion started fizzling out. However, the trend has started regaining moment, albeit slowly among black South Africans.

North African fashion trends are rather conservative and broadly influenced by the Arabic and native Sahel inhabitants.

Three common fashion themes that keep on recurring, albeit, with a drop of modernity, include Burnous, Jellabiya, and Kaftan. 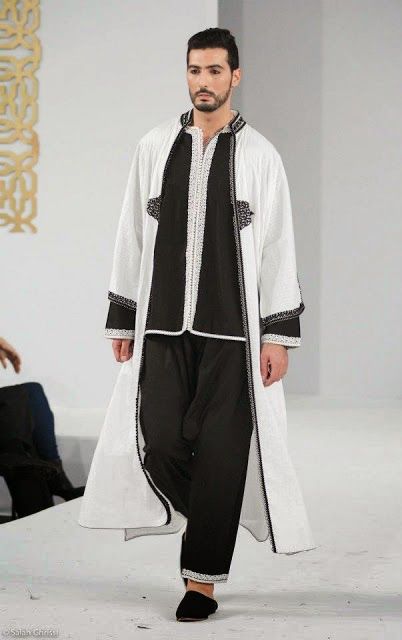 It is a long cloak of comprising of coarse woolen fabric accompanied by a hood. It is often white, although some other colors, especially shades of blue are also included these days.

It is an attire of nobility often worn by the high-ranking in society during special events.

Burnous has undergone a tremendous transformation of late. While modern imitations have come up, its stylish essence still remains the same.

Jellabiya is a traditional Egyptian attire for men. This “man dress” is commonly worn by men along the Nile Valley and areas bordering it in Egypt, Sudan, Eritrea, and Ethiopia.

It is a gown that has no collar (obviously!), has a wider cut, and wider sleeves.

Jellabiya comes in various colors. White is prevalent during the summer. But in winter, there are many choices, including grey, tan, blue, olive, among others.

Though commonly worn by men, Jellabiya is also worn by women. There are many trendy fashion designs that have sprung up, especially for women.

Kaftan, though common in Senegal, is more of traditional attire in the Sahel region, which also includes Mali, Mauritania, and southern parts of Algeria and Morocco, among others.

Modern kaftan is made using the latest fabric blends that makes it astounding.

Eastern Africa is relatively busy in terms of fashion trends compared to Northern and Southern Africa. However, it is still slightly less busy than it’s counterpart, West Africa.

Some of the Afrocentric fashion designs that are authentic to East Africa include Kanzu, Kitenge (though predominantly female) and Kidan Hebesha. 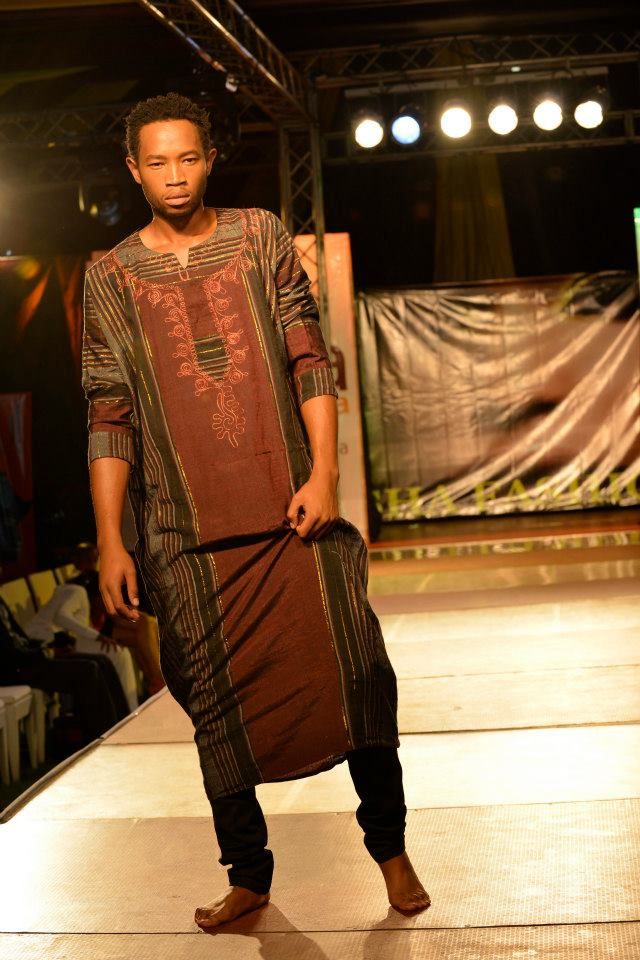 Kanzu is a common Swahili men’s cloth. The Swahili people are found along the East African coast including Kenya, Tanzania and upper parts of Mozambique.

Kanzu (tunic in English, and thawb in Arabic) is a white or cream-colored robe adorned by men in the East African region.

The Swahili people wear Kanzu with a blazer, suit jacket, or sports coat. A traditional kofia (hat) can also be worn on the head. Kanzu is commonly worn by the groom during wedding ceremonies in East Africa. The groom’s party often wears a blazer.

What makes kanzu trendy is how it is able to be accentuated with modern accessories that make it refreshingly stunning.

Kidan Hebesha is attire that is commonly worn by men in Ethiopia and Eritrea.

It mainly comprises of a white shirt, a matching pair of trousers, and a light gauze-like fabric that is loosely wrapped around the chest and shoulders.

West Africa is the heartbeat of authentic Afrocentric fashions.

There are so many different, and sometimes competing, fashion trends in West Africa.

However, we can mention a few that have remained indomitable over the ages. These include Dashiki, Agba, and famous Kente.

Dashiki is a colorful attire that covers the upper half of the body. It originates from Nigeria but is also widely worn in West Africa as a whole.

The attire is usually made of loose-fitting pullover garment, tailored and embroidered neck and sleeve lines, and an ornate V-shaped collar.

Dakishi suit is what has become something of trendy especially during special social occasions such as weddings and premarital visits to the fiancee’s home. 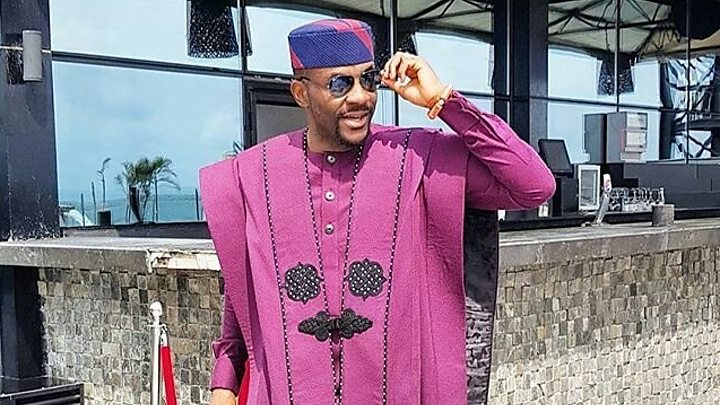 Agbada is a popular Nigerian attire for men. This gown is long, wide-sleeved and often decorated with silky embroidery.

Most often, Agbada is worn together with ‘Sokoto’ trouser. And sometimes, with ‘Obasanjo’ hat. The Sokoto trousers are slim-fit trousers whose lower end is just slightly above the ankle.

The ‘Obasanjo hat’ is a kind of hat that used to be famously worn by General Olusegun Obasanjo, the former President of Nigeria. It is a hat commonly worn by Nigerian elites, especially from the populous Yoruba community.

Kente is a traditional Ghanaian fabric with carefully designed patterns that communicate.

Within these patterns, history, literature, political thoughts, religious beliefs, and ethics can be communicated.  Each color used bears coded message.

However, unlike the traditional kente that used to be woven using the loom, modern kente is print design. Nonetheless, the communication essence still remains even though the young generation hardly comprehends the hidden meanings.

The modern trend for men is to use Kente sparingly, especially along the margins of the shirt or as an accessory fabric.

The trends of authentic African designs move like waves.

There are times when a certain design is up and there are times it ebbs out to near extinction. As the winds of modernity flow, most designs get repackaged into newer forms while still retaining the primal essence.

The above mentioned designs are not novel but have undergone various incarnations and renaissance to their current trendy form.

HudsonHudson is a freelancer writer, author, accountant, and techpreneur. He writes on topical issues relating to technology, business, entrepreneurship, self-help, society, and geopolitics. Following up on African affairs and writing on topical issues about Africa is one of those things that greatly inflames Hudson’s passion. You can email him at: job4hudson@gmail.com
Leave a Reply Cancel reply